Create an Account - Increase your productivity, customize your experience, and engage in information you care about.

The Improved Order of Red Men

The Improved Order of Red Men was a fraternal, social, insurance, and political society. The society was for men only and did not admit First Nation Natives, though they mimicked the customs of the Iroquois tribes from before the Revolutionary War. The demographic of white men drawn to the west coast of the United States was similar in Marin County California and in Jackson County Oregon from the 1850s to the early 1900s. The description of this society by Stanley J Bransgrove is an excellent discussion of the Improved Order of Red Men. The roll of Fraternal Organizations in Marin County California was similar to the social structures of Jacksonville Oregon.

For an excellent explanation go to the mill valley website. The material is the copyright of Stanley Bransgrove. See also Toward a Fraternal History of Marin County: A Survey of Secret Societies being a General History of Various Fraternities and Their Specific Impact in Marin Co Ca by Stanley J. Bransgrove, P.M., M.R.S., F.G.C.R. 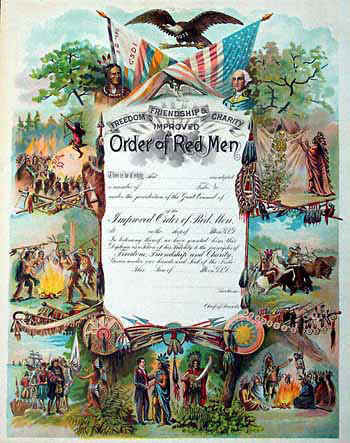